Saturday.
Went for Scouts’ farewell party.
Chianwei’s boyfriend, Justin came to pick me up.
Went for a yum cha session at Leo’s together with Ivan before we go to the party at Amanda’s house.

This is how my hair was before meeting up with chianwei and before getting insult by her.
I susah payah go blow blow and blow, and I even use to straightener, wax, etc.
she said it’s sux! wtf! 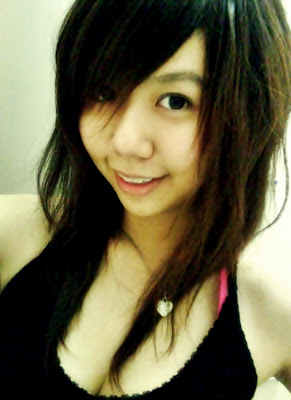 Later on, I use comb to comb my hair until it become straight again. At Leo’s, Chian wei is so pampered, being feed by her boyfriend. I seriously can’t stand it! gosh! what to do, jealousy struck.
We called Kehui up, wanted to ask her join us at Leo’s, mana tau, we got screw. Cause it’s already 7.30, we told her we will be there on 6, and therefore she’s at Amanda’s house long time ago.

We headed to Amanda’s house.


Okie, we seriously feel left out.
The table the juniors made for SOPHIE AND KOK WAI, our beloved ASM
and The outgoing board. 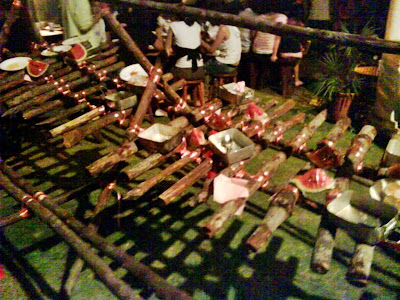 And we as the ex-board, being so left out.
sitting around the rubbish bin.
i would say.
“旧时王谢堂前燕， 飞入寻常百姓家！”
sigh! so pitiful.
the ex board had our very own 3BUDI’S SCOUTS REUNION. Talking bout boyfriend. my two girls, chianwei and kehui were attached. sigh. “I need a boyfriend.” just right after I said this, I got ZAT by junkang kao kao. cold blooded weih! 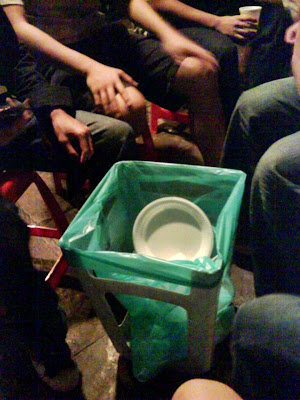 There’s insufficient food supply.
and so, I didn’t really eat. 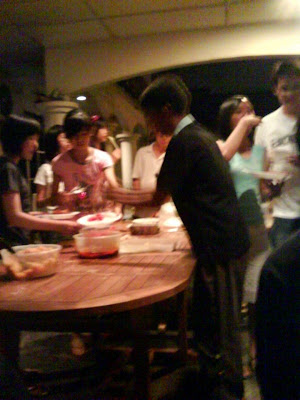 We got real bored. as nobody want to talk to us.
When we saw clement and lester going out, we quickly sneak in to his car.
Just to avoid boredom and awkwardness, me, kehui, chianwei, ivan and junkang don’t even mind to squeeze in Lester’s car. 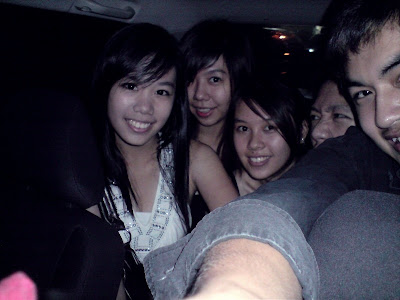 We went to USJ 2. Chianwei then left with her beloved bibi justin. lol.
We were so tak puas, and so, me and junkang, kehui and ivan start to act as if we are couple.
We took photo together and walked around USJ 2 with hand holding each other.

me and the gorgeous kehui.
girl, i like hanging out with you too. 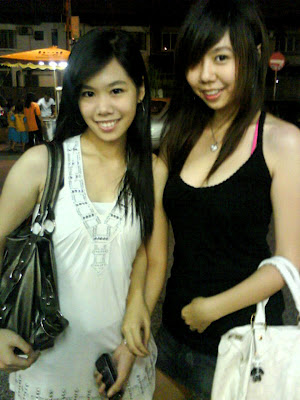 my mom said he is very good looking. lmao. 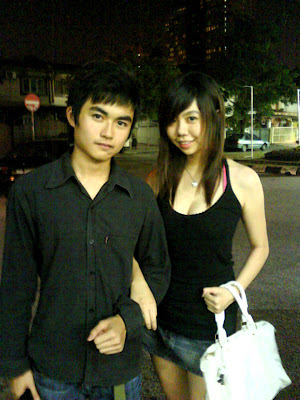 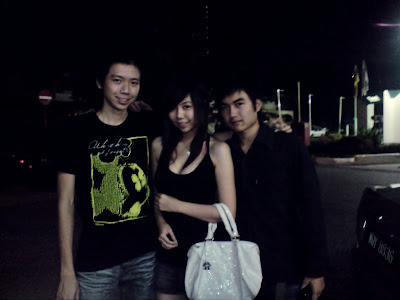 the very miang pimp. look at his hand! wtf. 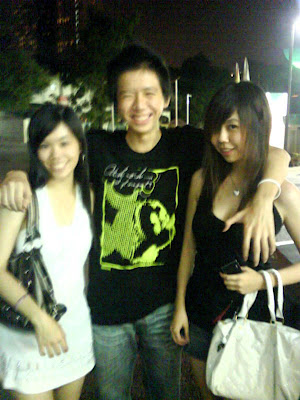 and the couple. chianwei and justin in the car, ERN.. i am not so sure what they doing. Kehui said she heard someone moarning inside there. ahemmmmm. lol. 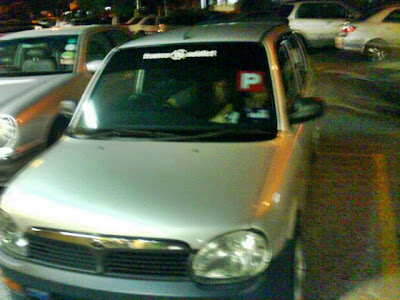 Got back to Amanda’s house after that.
Listen to speeches and present/souvenir give away to our beloved asm and the out going board, our juniors.
Those people had really did a great job in improving the scout troop. Especially Kok wai and Sophie, without them, we wouldn’t have such farewell, & we wouldn’t even have such a great troop. *applause* 104th acouts rocks! 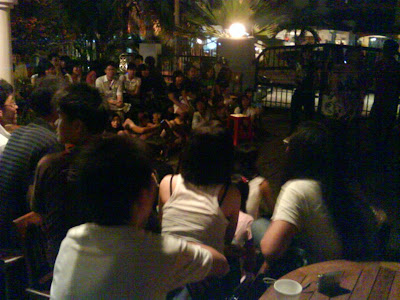 The present for the two ASM.
they were so touched! I saw kokwai sobbing. hee!
dear ASM, do remember our faces!
*loves* 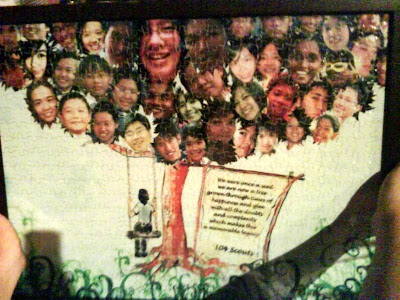 Tze herng! =)
my onced best buddy in the troop. 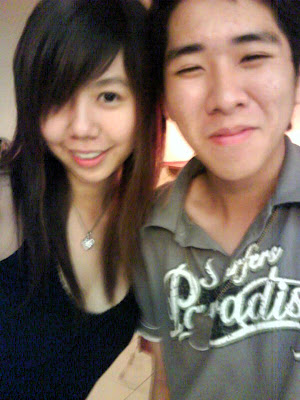 Miss Sophie Lau. The one that I respect the most.
The one that had give me a chance.
Thanks Miss Phiephie! she said she likes people call her phiephie, =)

You are the best Troop Leader i ever had. Thanks for everything. 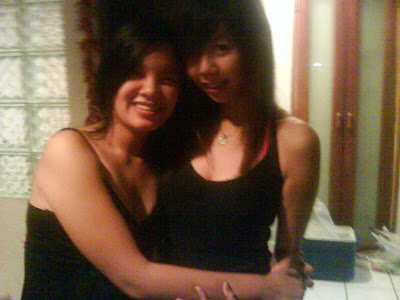 JH came over to fetch us to Station One cause we seems to be excess there.
To get rid of the awkward situation, we decided to leave.
Station One then.

Cards session at Station one,
I won a few times. * proud* 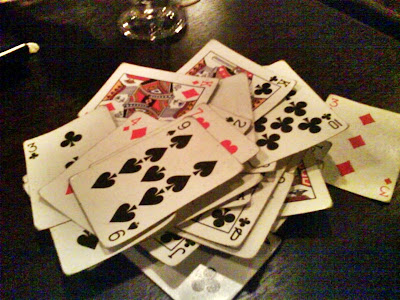 my very 1st picture with JH.
Ignore the fact that he’s smiling like an idiot,
yet he self claimed is cute. lol. * don’t kill me * 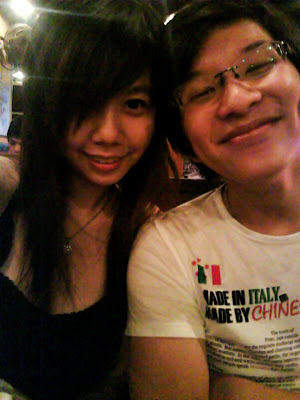 Went back to Amanda’s house around eleven thirty to pick my sister.
JH then fetched us home.

Yesterday was “孟兰节“， “鬼节” / “GHOST DAY” or whatever you call it.
My dad’s friend who got stroke so happened to pass away yesterday.
My neighbor’s dog has been crying the whole damm night for hell know why. craps.
& An horrified accident happened at Cheras that causes me to make a profound impression. 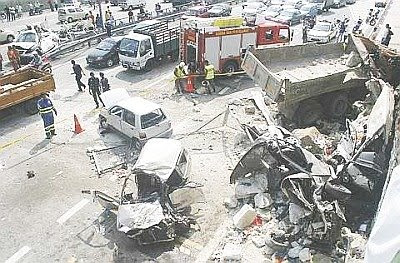 Crash aftermath: Damaged vehicles and debris at the scene of a horrific accident on the Cheras-Kajang Highway Friday after a 10-tonne lorry rammed into seven vehicles, killing two people and injuring several others, five of them critically. The 9.30am accident caused a massive traffic jam. — ABDUL RAHMAN SENIN / The Star
—

I seriously can’t imagine how does this happen?
A ten tonne lorry crashed into a motorcycle, three cars, a van and an MPV. Obviously, the motorcyclist died on the spot. The van driver was dead too, but surprisingly the car- PERDUA KANCIL’s driver survived. Miracle, I would say. I thought that the Kancil’s driver will definitely die in the accident, but he survived. In such a ghastly accident, only 2 people were sacrifice, it’s another miracles. Eight vehicles involved, and all the vehicles had turned into debris, the survival chance should be almost impossible, but, miracles happened, many survived. We should be grateful. To those that were killed in this horror highway accident, may you all rest in peace. and and and. I got a friend from SU that is so kind. He went back to school to help the teacher for something like the charity bazaar. He need to go all the way to Klang find nice decoration items, find catering and got to pay the rm200 deposit himself first, and he was asked by the teacher to order special-made chocolate from factory. He ordered and paid 800bucks by himself. and the teacher suddenly say don’t need anymore. WTF! and he got to pay the 800bucks by his own and not going to get a claim back.

Dear teacher,
we are still students,
we are neither successful business man nor millionaire.
and his parent is not so so wealthy. gosh! — Today. I had my piano lesson. sucks big time. My piano teacher had gave up. sigh! and now, The only part I can score should be my aural test which is my worst part all these years. =.=” Can you imagine how bad is it now? I am still not familiar with the notes, and I had never touch my scales. gONE weihhh! 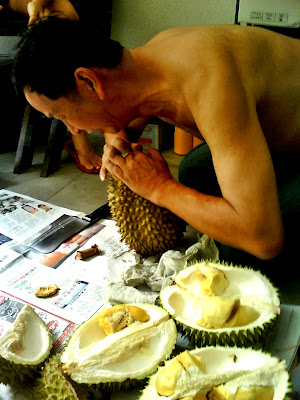 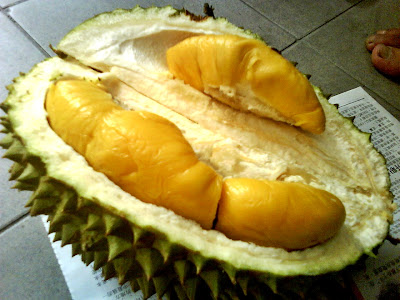 omg. i m a durian addict. 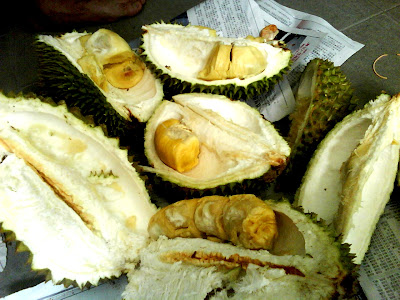 The normal durian’s seed and the one dad bought.
much much smaller. 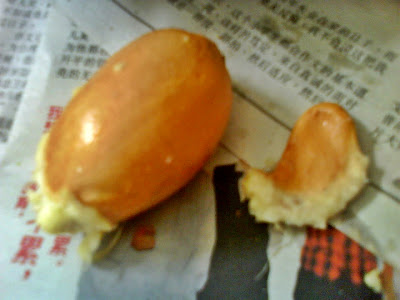 This is a fish for eating purpose.
My dad caught it with his friends. 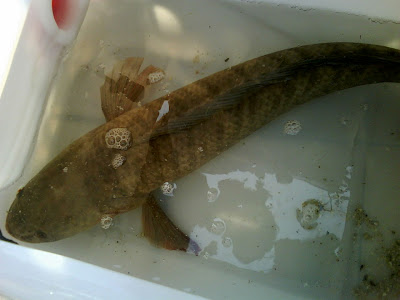