My last paper – Chinese Literature.
I was so panic the day before, very very stressed up.
In addition, some weird chilly freaky stuff happened, which seriously got me burst into tears.
But nobody seems to trust that chilly stuff that happened on me. *sigh*
Thanks God, the paper was fine.
I am the 1st one who got out from the exam hall.
Hopefully, I will get an A for it?

We went to Pyramid right after exam, said is to celebrate. But we( Maggie, Fan & I ) had our hidden plan. Thanks to the cooperation of others. The mission accomplished!

We went to pyramid along with jeff, emily, alvin, gavin, mun yee, grace, pik san and cheng yee.
Asked Emily to lead them to Gasoline, then Fan and I went to Secret Recipe to get a cake for the birthday boy. Got back to gasoline and meet with the rest. Have our meal and played some games. When we finished our meal, the lights were turned off, the waiter brought out a birthday cake with lighted candle!

I tell you, He was so so so so surprise.
He thought we had forgotten about his birthday. 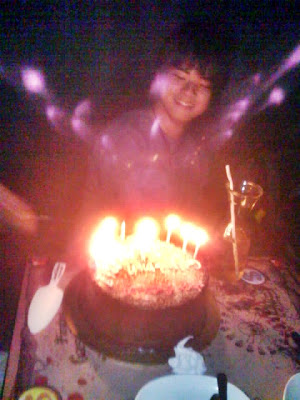 Oh yea, Alvin lost the game and got some punishment,
He was force to act as if he couldn’t afford to pay our meal in front of the waiter and asked the waiter whether he could work there as dish washer to pay the debts.
The waiter expression was super funny, I don’t know how to describe.
It;s just, the cha dou look.
before that, the other loser, Gavin was forced to tell the waiter that HE is BEAUTIFUL. lol.

Then, we went SHOPPING!
I went shopping for my work attire, black spaghetti top and white mini.
Thanks Emily for walking around with me. * tiring *
*pain* I was in heels. ouchhh! 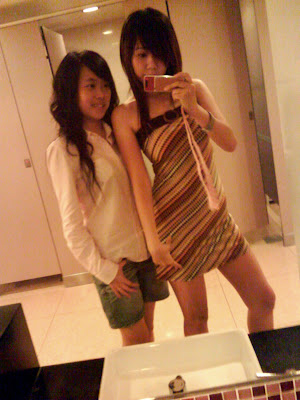 Around four, Maggie, emily, munyee and Gavin left.
I joined piksan, fan, alvin, jeff and vingent for bowling.
well, my feets hurts because of the heels, so I was actually sitting down watching them play.

Hmm, 1st outing with my classmates, after so long.
but, I enjoyed!
Thanks people.